What is gossip? The Webster definition is, “casual or unconstrained conversation or reports about other people, typically involving details that are not confirmed as being true.” The dangers of being involved in gossip are all too apparent in many close community circles. Gossip is the fuel that has grown most of the community conflicts from the initial small conflict to the raging firestorm. Many groups go from vibrancy to death because of gossip. There aren’t many things more ruthless and awful than when someone acts as if everything is okay, and goes behind that same person’s back, slashing down that person in front of others. People think sharing is helping, but it’s like picking at a wound. It only aggravates. Gossip is death, and it often grows to be worse than the original crime. Don’t turn your back and cut your friendship with that person either. Alienation can be one of the greatest forms of hatred. And don’t take sides. The typical he said, she said will create division in your friendship circles. Love both people or camps. Most mistakes can be forgiven and can actually help build and strengthen friendships, and the community because of vulnerability and the issues coming to the surface. Through vulnerability comes humility, and that promotes correction, healing and strengthening. We all fail and get lost once or twice in our lives. However, if it is clear that person can no longer be trusted then a careful decision needs to be made to distance yourself. Seek counsel before you make any rash decisions though. 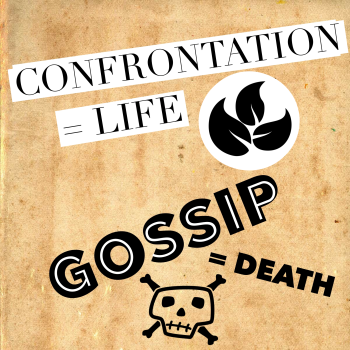 So why do some take the road to gossip? Maybe in the moment we think it will help bring resolution, justice, we’re concerned or we’re just bored with nothing better to talk about. But gossip only destroys, burns and pillages. So is there a better way? Yes. Confrontation. You will in no way condone their actions. You will just look to seek out understanding, love and provide counsel if they seek it (and hopefully they will). Where gossip leads us to death, confrontation leads to life. In the big old book it states, “If your brother sins against you, go and show him his fault, just between the two of you. If he listens to you, you have won your brother over. But if he will not listen, take one or two others along, so that ‘every matter may be established by the testimony of two or three witnesses.’ If he refuses to listen to them, tell it to the church; and if he refuses to listen even to the church, treat him as you would a pagan or a tax collector.” Matthew 18:15-17

So next time your friend decides to pass some sensitive information about another, stop them, as if it were a disease and you had the cure. If you’re in a position to confront the person your friends are gossiping about, setup a time to chat and ask them what’s going on. Don’t confront in anger, pity or hate. If you can’t do this, stay out and get back to your life. Always be part of the solution, not the problem. Confront in love, compassion and constructively seek a solution and reconciliation for those involved. If the person or group involved listens and seeks help, love has won the day. And it’s possible it’s not your role to confront. Maybe someone else has already fulfilled this. If this is the case, just love. Love is powerful. It can usurp almost anything, and can bring about healing and reconciliation all on its own. The world can always use more love. Be one who helps fills it with this and put gossip to death.

Passionate about discovering more on this fascinating and interesting journey. View all posts by Joshua Nash

One thought on “Gossip to Death”